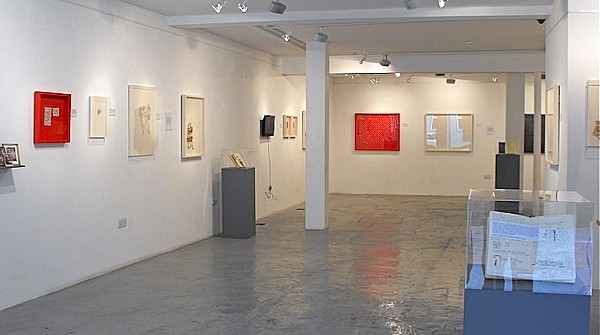 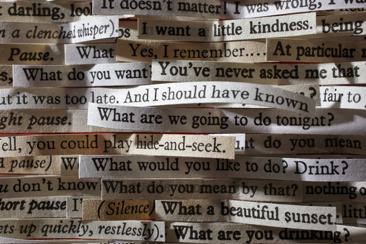 From our first word we proceeded to name the world. Language shaped our sense of self, gradually meshing in it's codes and conventions, atomising an existence hitherto more blended and oceanic. As adults our inner worlds resemble piano rolls, a revolving stock of words, indexed by emotional loops, keyed by commentary, judgment, and dialogue. It's a story we tell ourselves, from a slim, well-thumbed libretto of snapshot memories and dog-eared vignettes. A story we almost believe were it not for the unbidden intrusion of random memories, the Proustian recollection, or the trip wire of the Freudian slip. All hint at the presence of richer, more complex narratives, a compressed geology shaping the contours of our lives.

This is the locus of enquiry for Ellen Bell in Camera Obscura & Other Stories - a hinterland where if we are to believe the testaments of near-death experience, the photo plate of our inner world imprints everything. Fathoming her own experience, Bell explores the story of identity found in and through the family. Reaching back to a time of intimacy, openness and vulnerability, it is a charged endeavor. However, these are not the candid revelations of a Tracy Emin. Where Emin is often up front, take it or leave it, two fingered, Bells' approach is oblique, a 'slow art', cool, calculated, concentrated intensity pared back to a pristine elegance. What I find compelling in her approach, the restraint, the scalpel process, the fragility and scale of the text, all serve to accentuate the messy ambiguity of feeling pressing at the membrane of words. I find myself moved, connected to her search, by an acute even raw sense of her interrogating her own understanding of language, intoning a word over and over again, like a rosary, that it might resuscitate a more primal imprint, a deeper feeling.

The work of Ellen Bell leaves two distinct though connected impressions. Firstly a question how we encounter language, and meaning? Where does it reside? Is it transmitted, negotiated or recreated by the viewer? Secondly, what separates the mundane and the poetic, is paper thin. At any moment like a circle closing, the poetic may saturate the mundane, and the particular point to the universal, a deeper reservoir within ourselves, beyond words.

Eberhard Ross: The Space Between 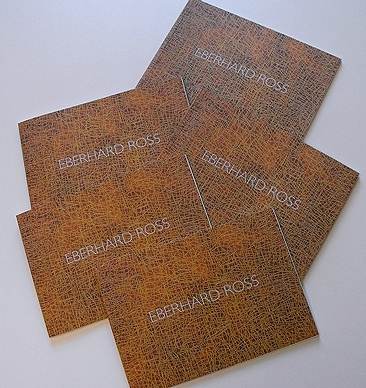 Logic will get you from A to B. Imagination will take you everywhere
Einstein

Looking at the world
In Four Square's recent film 'Organic Geometries', the German artist Eberhard Ross likens himself to "a scientist in art", an odd coupling you might think, given that received wisdom so often sets these two fields at opposite ends of the spectrum. But conventions can mislead and behind this perceived divide - a relatively recent construct of Europe's Enlightenment - is a history rich with fertile overlaps, where Da Vinci is the archetypal embodiment of it's possibilities.

As art historian Martin Kemp, world authority on Leonardo and champion of the current cross discipline dialogue between science and art, points out; "Shared intuitions about the natural world drive the pursuits of artists and scientists" and for each how questions are framed owe as much to imagination as fact, "It is a kind of intuition, something that in an object is perceived as especially interesting that captures the artist's attention. Many scientists start their work in the same way.' So whilst paradigms change, art and science, neither being homogenous categories, remain and have always been engaged in a common aim to confront universal questions.

For over twenty years Ross, struck by his own children's uninhibited responses to the natural world has defined his search, as an "attempt to understand the system of nature" exploring the underlying rhythms and patterns connecting visual phenomena as diverse as crystallised protein colonies, the swarming behavior of birds, and most recently, snow falling on pines. Ross takes his place within a wave of collaborations and creative dialogues between scientists and artists, after having come to the attention of Professor Matthias Geyer. In 2007 he was given a solo show at the Max Planck Institute in Dortmund, where he is now a frequent visitor, discussing with scientists their findings, his own work and the parallels between the two."

Looking in the studio
So how does an artist's parallel and intuitive encounter with events at the frontiers of science translate into art? Do the paintings differ or go beyond the seductive photos we find in glossy science periodicals and if so how? Both artist and scientist engage in experiments, a series of what ifs, where the way the experiment is set up and conducted significantly determines what is observed, and it is the way these observations are framed-their form, that can contribute to a dynamic enlargement of the way we see ourselves in relation to the world. Perhaps then a focus on the artist's instruments and practices, can help us better understand the intentions behind the work, which in turn informs, what it is, and why it is what it is, rather than what it means, which must in the end grow out of our direct encounter with the work.

The film 'Organic Geometries' provides a window onto Ross' practice, as we see him work on paintings from the Speicher series. In a concentrated process, that can last up to 18 hours and which must be completed before the paint dries, he begins inscribing lines into a surface of wet oil paint, with a vocabulary, distilled to essentials, like the binary 1 and 0, lines -straights and curves, and the spaces between. It is a way of working that seems to me essentially mimetic; the flat picture plane prepared in advance with fields of colour, presents an arena in which to act, rather than a space to reproduce, and the artist speaks of the energy needed to sustain this process and his own state within it - "I forget everything- I get empty in mind". The intricate lattice which emerges, appears to follow an inner organic need and unfolding intuitive logic, growing and animating the surface, where the mass of interconnecting lines are paradoxically additions and subtractions. Rather than 'copies' of phenomena I would suggest they seem to demonstrate principles in action, a tracing out of energy, an imprint. Interestingly the title for this series, Speicher, translates as, a place where memories are stored.

Looking at the paintings
Professor Kemp's quotes at the beginning of this short essay highlighted how intuition can germinate and inform the work of scientists and artists, I would suggest it is also the corner stone of encountering art, which is essentially a heightening experience. In a world where we are bombarded with accelerating visual stimuli, confidence in the connection between quiet looking and intuition has become increasingly weakened, supplanted by an over reliance on ideas and concepts to supply and support meaning. In conversation with Eberhard it is clear he wishes his work to be an antidote to this, an invitation to slow down, and discover something of what he finds in painting them.

A large black and gold Speicher hangs in the room where I am writing this. On first impression it's all surface, a lattice of golden filaments give a pleasing luminosity, a decorative elegant density, but after a while space appears, the eye is drawn in, the mind hard wired to find meaning searches for pattern, rhythm, some sort of narrative, shoals of curves emerge, then a forest of uprights, then they are in dialogue twisting and spiralling in a dance, is it the lines or the black between the lines that create the dance? Associations flow in, muscle fibres, lace, leaves, neural connections, spider's webs. All at once the black and gold oscillating together create green and a hyper real image of grass emerges, then as suddenly the filaments shrink, the golden light contracts, the piece becoming almost entirely black. To what extent am I receiving or projecting I can't say, and perhaps that's to miss the point, what is clear to me is that the connections and questions that arise, flow from the experience of looking at this painting. I am left with an impression, that for all their density and movement the work equally radiates stillness, they are both full and empty.

Later, on a walk by the river, I remember this painting in the tall grass, as it bends in the wind, the blue between bare branches just flowering with leaves, ripples creasing the water, and a sudden swoop of Starlings. Snapshots which call to mind the Buddhist principle, that all these separate things exist only in relation to one another.

"Music is the space between the notes" - Debussy

Denee Holloway: Once in a Blue Moon 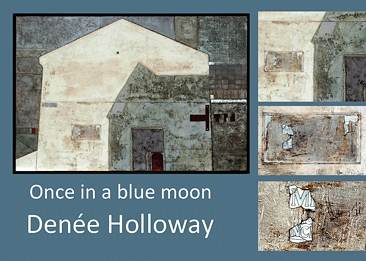 Denee Holloway: Once in a Blue Moon

My first encounter with Denee Holloway's work were two sketchbooks, one dark Sunday afternoon back in November - two sketchbooks from a table stacked with six or seven - and there were more her daughter Louise assured me, 30 in fact, catalogued to date. In page after page I found an investigation of forms at once independently captivating yet suggestive of endless variation, where techniques and materials were put through their paces in a dialogue between the 'what if' of creative play and the quiet insistence of a poetic logic, revealing and refining itself. In a sequence that is both illustrative and touching, hinting at a symbiotic creative partnership with husband, John Holloway, the landscape photographer, bin-rescued test prints were cut, torn, collaged into wonderful abstractions with smudges of colour and deft additions of fine lines from a rotring pen, demonstrating an assured vocabulary and delicate grammar.

In contrast, where sketchbooks suggest new horizons and narratives, 'finished' works can sometimes disappoint, contracting back to a repertoire of tried and tested strengths. Turning over this trepidation, we climbed the steep incline to a studio, rising back, up and off their Kingston home, I scarcely noticing the splendour of the landscape unfolding behind us, until Denee points out some wonderful green lichen circles on the slate roof and discusses with John, food for Henry, a domesticated pigeon sat on a nearby branch and then we're in a modest wooden studio, with a rectangular window framing the Downs. A studio is a particular locus of energy, here shelves are stacked with pots, jars and tubs brimming with all manner of flotsam and jetsam, paper clips, nails, bobbins, stones, corks, shells, toothpicks, can rings, car parts, and stood with the artist, now in her eighties, it is palpable how alive this working space is for her. The work, which doesn't disappoint, is a mixture of painted reliefs and assemblages, that share a language of compressed vitality, with precise and spare forms – a dynamic language and grammar clearly evolving out of the sketchbooks. The landscapes have an ancient mythic quality, an austere beauty eschewing the parochial and sentimental, where the eye is richly rewarded by the tension of lines, and tilted planes, enlivened by a luminous palette. Wonderful textures, distressed, rubbed and stained with pigment, form an essential part in the visual character of the work, catching light, casting shadows, anchoring and enhancing the complex spatial relationships.

The assemblages are full of wit, lightness and compositional ingenuity, yet within their playfulness a dreamlike archaic quality, is never far, particularly accentuated by the inclusion of found objects which add an additional narrative and tactile quality, that creates a bridge between the visible world and the world of dreams. All in all I felt this to be the work of an artist with a vision both deep and subtle who invites us to look at the world afresh.

Back at the house over tea, Denee shared more of her sketchbooks, and spoke enthusiastically of plans for new work. On leaving I was struck by what a wonderful counterpoint this retrospective would be, celebrating a life's work, in an epoch enthralled by digitally polished perfection, and fixated on immediacy and youth.

As Picasso said "we don't grow older we grow riper."